The Formula B Fuzz Rangers takes two iconic circuits and encloses them in a beautifully finished chassis, with vintage-style controls. With the option to run the Fuzz or Boost independently, it's an incredibly flexible pedal for your pedalboard, but where it gets interesting is that there's a toggle to set the direction of the signal. You can choose whether to run the Boost into the Fuzz, or vice-versa. The results differ dramatically...

The Fuzz circuit is based on the silicon Fuzz Face, using a pair of NOS military-spec BC108 transistors and carbon-layer resistors. It sounds great on its own, and reacts really nicely to your guitar's volume pot - as Fuzz Faces do. Running the Fuzz into the Boost gets you a clearer tone with plenty of gain to push your amp, showcasing all that lovely Fuzz Face breakup.

The Boost circuit is based on the Dallas Rangemaster Treble Booster, with silicon BC549 transistors to reduce compatibility problems (polarity, power etc) with the Fuzz circuit. Uniquely, there's a toggle switch to shift the Boost emphasis between Low, Mid and High frequencies, making it more flexible than a traditional Rangemaster. Running the Boost into the Fuzz saturates the input of the Fuzz Face and gets you a rich, warm, super-fuzzy character which responds well to how you set the EQ toggle.

More than simply for fans of Jimi Hendrix and Stevie Ray Vaughan, this pedal will serve you well with its vintage vibe and tonal flexibility.

For a long time I was convinced that I didn't need a fuzz. This is a pedal that convinced me otherwise. But, be aware and don't go at it guns blazing like I did. Jim offered some good advice as there is a lot of gain waiting here. You may need some time to get your levels right and having extra options such as the boost/fuzz direction switch and the low/mid/hi toggle can have a big effect.
Backing the guitar's volume back a bit also helps with not overloading your amp. It's a great value pedal that has a permanent space on my board.

I heard about this pedal on Instagram and contacted Jim at Boost Pedals immediately to find out about availability. Jim was quick to respond and advised that the next shipment was due in a week. He was also good enough to add me to the update list and to personally email me when they arrived so that I did not miss it. One day after they arrived to Boost from Italy I received mine from Boost. That is superb service. I cannot speak highly enough of them as the UK Agent.
The Pedal built by Marco in Italy....... phenomenal! For a start off it is two/three fantastic pedals in one unit so it is excellent value. The fuzz is the most usable Fuzz I have ever had.... it somehow manages to give crazy good fuzz at higher end whilst not muddying up the lower end and chords..... It also cleans up really exceptionally when you lay back off the volume. The Tone Ranger side of the pedal has that fabulous glassy SRV type tone but again is exceptionally versatile in allowing you to play perfect cleans, edge of break up or driven....this side is pretty much a pedal you can use as your main tone range. Its brilliant. And then you can switch both on for a superb driven fuzz or clean it up by lowering the volume.....finally you can reverse the fuzz into tone to the other way round which gives a more modern (to my ear) overdrive. All incredibly useful.
I am so glad I bought this pedal. I would recommend it to anyone who is looking for these classic tones.
Superb. 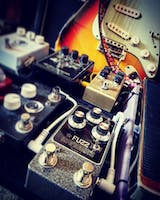